Hyena attack in a waterhole

By JabulaniAdmin 20th May 2014 No Comments

During a recent game drive, two hyenas were spotted opposite a waterhole on the reserve. We stopped to observe them, and to see in which direction they were headed. A third hyena then appeared, and it was evident that the two we had originally found were not happy with its presence. They immediately gave chase, and the third hyena dashed into the water while the other two waited at its edge. 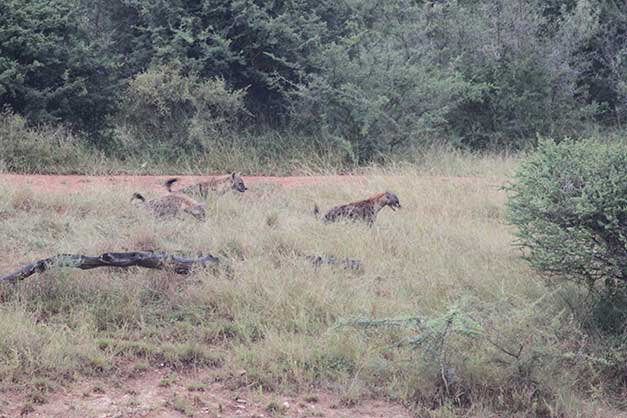 The arrival of a third hyena was not welcome

We drove a bit closer. At this point, the offending creature had left the safety of the water and all three animals were on the dam wall.  The two hyenas then started viciously attacking the third.

The hapless victim ran back into the waterhole, but this time the other two were not reluctant to follow and remained hot on its heels.

The two aggressors each bit an ear, and appeared to trample the third under the water. You could hear the beast screaming in pain and fear as it resurfaced.

It was only when a fourth hyena arrived that the two bullies pulled back and swam back to solid ground. They shook themselves off and circled around the new arrival. When the third hyena finally emerged from the water, both of its ears were bleeding. Thankfully though the massacre was over, and all four set off in different directions.

The bush playground is not always kind!