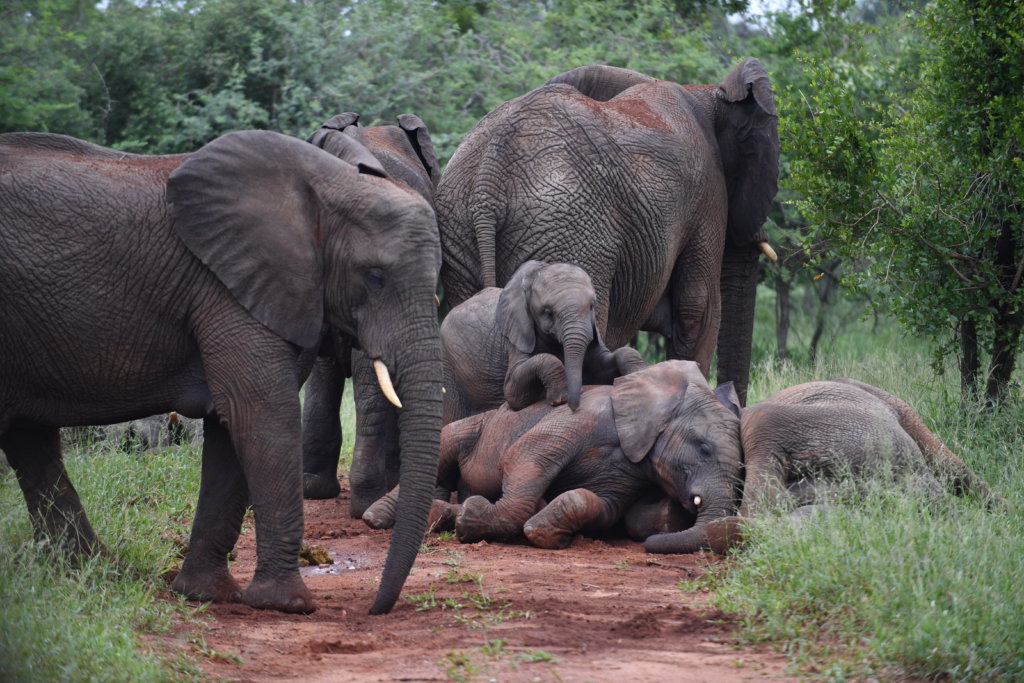 Everyone may be familiar with the term “Herd” when it comes to elephants, but few may have heard of their extended families or social structures called “Bonds” and “Clans”.

In this blog, we will delve deeper into these fascinating groups, but first, let’s get back to basics, with the herd, martiarchs, allomothers and bulls…

Elephants have a unique social structure that seems to echo our own. They face many of the struggles of co-existence that we struggle with. An extremely social and gregarious animal plagued with many of the emotional issues normally only associated with humans, it seems possible that we can learn from them. Maybe we need a bit more of the wide-open spaces, possibly sleeping under the stars is called for.

Elephants, like humans, start out slowly with none of the ‘hit the ground running’ strategy that is employed by many other animals from the wide-open spaces of Africa. In fact, young elephant calves are more likely to trip over their trunks and hit the ground.

A Herd to Call Home

While most of us know that elephants live in herds, what we may not know is that you get female herds and male herds, two separate groups that rarely meet, and beyond that there are bond groups and clans.

The basic family unit in a herd of elephants, with anywhere between 6 and 20 animals, consists of the matriarch with her calves and grand calves. While the females often remain with the herd for life, the young bulls stay until around 12 to 15 years of age, when they reach puberty. They will then start to become more independent until they leave their herd completely, to either roam alone or find a loosely-knit group of male elephants to join.

The nurturing and maturity period for elephants is possibly the longest of all mammals, with a three to five year weaning period only ending with the birth of a sibling. Even then the young elephants remain with the family for years, learning from their elders while enjoying both physical and emotional support.

‘Babysitting’ (also known as allo-mothering) is important in keeping elephant calves safe from both predators and their own foolhardy behaviour, helping them over obstacles and teaching them what to and what not to eat. But this nannying also acts as a learning ground for adolescent female elephants, teaching them how to become mothers.

Young and single, elephant mothers have their hands full raising a family in what can, at times, be an unforgiving environment. The survival rate for calves of inexperienced mothers is significantly lower than for mature cows so practising on someone else’s ‘little’ one is a smart idea.

A herd’s leader is not elected, but receives their favoured positions because of their knowledge and abilities. With the matriarch, she is naturally “chosen” as the elephants in the herd turn to her for guiding and when in danger, knowing that she has all the answers and leadership prowess.

In female herds, the matriarch leads the family group, the mothers and their young, who require her to show them to the cleanest water in the dry season and to know where to dig for underground water in droughts. Generally, the oldest and largest adult female member, the matriarch needs to remember the safest river crossings and know the signs of the changing seasons. The other elephants in the herd follow her, in single file. Her job is to ensure that the future generations survive.

The bulls in the male herd have only one responsibility, to get big enough to breed. Male elephants seldom mate successfully until they are in their 30’s as larger males will simply chase them away from any receptive cow. They spend their adolescence and young adulthood learning from older, more experienced males. The wisdom of elders is essential. These older males are important in maintaining discipline in the young bulls who have been known to randomly attack villages and rhinoceroses without provocation during ‘musth’. Studies have shown that the presence of the much older bulls prevents the youngsters from entering this state of extremely high testosterone levels that is normally associated with a readiness to mate and aggressive behaviour.

Families can split up and the decision to do so is informed by the ability of their particular home range to sustain them. Together these separate families are related genetically and form what is called a bond group – a second tier of relationships in elephant society. These inter-related bond groups forage over large areas, occasionally meeting at watering holes and favourite feeding spots, often with much trunk entwining, trunk to mouth behaviour, rumbling and ‘purring’.

A bond group may include as many as five or more families, and up to 50 or more individuals. According to Elephant Voices, “Although the ties between individuals across the bond group are weaker than those within a family, bond group members also have close and friendly ties, form alliances against aggressors, assist in the care of another’s offspring, defend one another in times of danger and greet one another in a special way.”

The size of a herd can change in response to seasonal changes in the availability of water, fresh green grass and marula fruit. When food and water are aplenty, elephants who usually share a dry season home range, may gather in large groups called clans, which consist of different bond groups and families and both female and male herds.

Clans of 500 to 1000 elephants have been recorded around waterholes, but usually they will reach about 70 individuals in number in savanna areas.

When good food is available, elephants flock to socialising, often with several different clans in an area. In these aggregations, several clans may intermingle. Sometimes they enjoy it so much that the odd defector takes to establishing residency in a new clan.

It’s thought that elephants may in fact prefer to associate with large numbers of fellow clan members, but can only do so when food and water sources are abundant, according to “Mammoths, Mastodonts, and Elephants: Biology, Behavior and the Fossil Record,” by Gary Haynes.

“Elephants are just like us. ” – Dr. Caitlin O’Connell-Rodwell, Elephant researcher

Why are elephants so much like us? There are many reasons, but in terms of their social structures, they, perhaps more than any other mammal, require socialisation. Like us, they need to learn how to ‘get along’ with others. Future leaders (matriarchs and alpha bulls) need to acquire the skills that will enable them to lead their rough bands of willful elephants. There are hierarchies that require hard work to maintain, garnering support requires political know-how as well as size, strength and knowledge.

Elephants also have personalities much like humans, from loud extroverted bullies to easy-going gentle giants. The ‘norms and standards’ of the herd ensure a stable environment for the raising of the calves who represent the future of the herd.

Learning how to be an elephant and navigate the uncertain and ever-changing waters and wilderness of life takes practice and mentorship. Elephants know that no man is an island and that the strength of the bond (whether in the family, bond group or clan) means the strength of the individual.

Find out more about the Jabulani herd here >