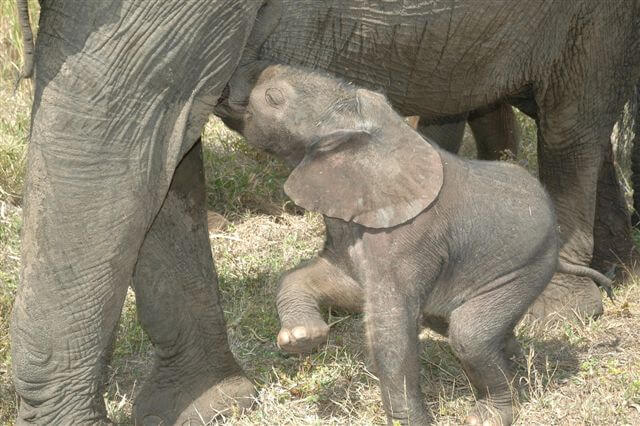 On the 19th August 2006, Limpopo was born to the Jabulani Herd. Her birth was an extremely significant event for both the elephants and our team at the lodge, as she was the first elephant calf born to the herd at Jabulani, a sure sign that the herd were happy and healthy. It seems fitting that Tokwe, the matriarch of the herd, would be the first mother of the herd too, as she would be the perfect elephant to set an example of motherhood to others, and we had complete confidence in her abilities to come. She did not let us down.

Limpopo’s father however, remains a bit of a mystery. He may well have been one of the Jabulani herd bulls, however, the birth happened to coincide with a little adventure that Tokwe took, exactly two years prior to the day, where she had set off on her own into the bush, and returned a day later. So, there is a high probability that she may have been impregnated by one of the wild bulls on the reserve. We knew we needed a poignant name for this special little elephant, so we decided on Limpopo, which is the name of a large river that separates South Africa from Zimbabwe. This was the perfect name, seeing as the herd were rescued from Zimbabwe, and brought to South Africa, so she has ties to both countries. Adine getting some love from Limpopo. Adine and Lente (her daughter), with Tokwe and Limpopo.

Three years after Limpopo was born, Tokwe gave birth again, to Pisa, and thereafter another three elephants were born to other females in the herd, as well as the successful introduction of orphaned elephants, Kumbura and Timisa. This has made Limpopo take on the role of the “Big Sister” of the herd, and she performs that role beautifully, always protective and helping her mother tend to the younger elephants. She has been known to confront dangerous animals that have crossed their paths in the reserve, in order to protect them.

Her best friend is Klaserie, who was born just six months after her, so she spends most of her time with her, if she is not by the side of her mother, who she is utterly besotted with. It is as if she is constantly watching to learn from her, which is important, as so most often, a matriarch’s eldest daughter will replace her role, if and when she were to pass away.

Tokwe has passed on a lot of her good genes to her daughter, who too has a slightly less wrinkled skin compared to other elephants, a slightly pointed forehead, and her tusks are also slender, neat and even. She is also an active elephant, just like her mom, resulting in a more athletic body shape. Limpopo is an exceptional Matriarch in the making, judging by how far she has come in the past twelve years.  She is an incredibly intelligent and beautiful young female, and very empathetic to every elephant in the herd. She has brought so much joy to the herd and to our team.