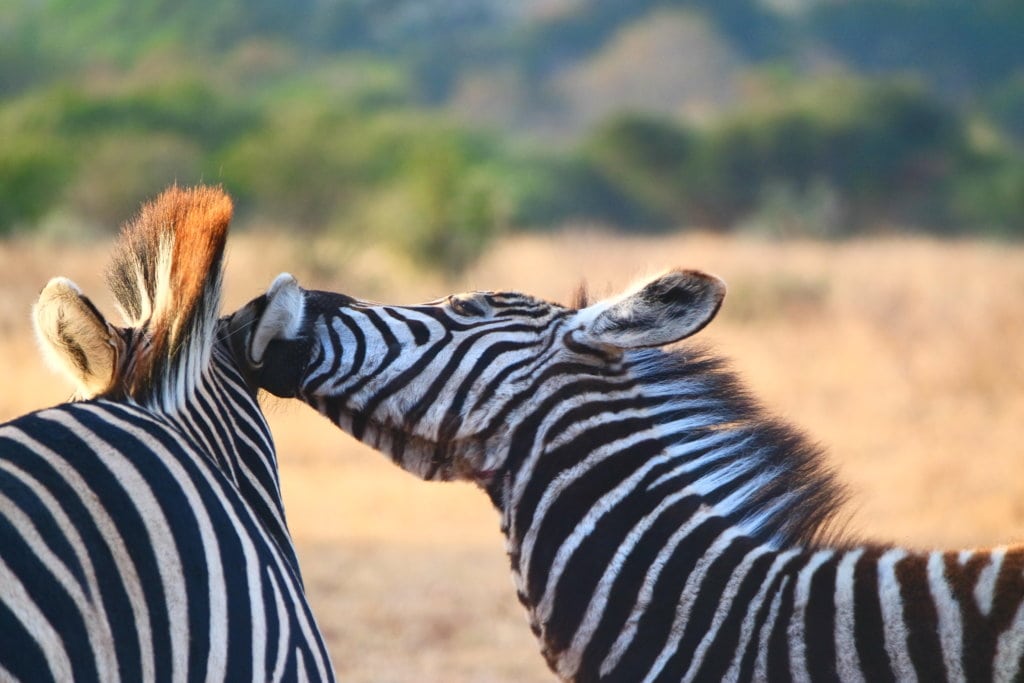 Are Zebras white with black stripes? Or black with white stripes?

I do not think I have ever heard any other question in my life as much as I have this one. In a personal and professional capacity. In Africa and even abroad – this was always the question on every guest’s lips.

Well, allow me to set your mind at ease, but also delve deeper. Zebras – to me – are one of the most mystical and beautiful creatures nature has to offer.
You would think with such an abstract and eye-catching coat, they would stand right out for predators to feast on. But believe me, once they start disappearing into the bush, they blend right in. Even when feeling threatened or in danger, they encircle each other and form what we call a “dazzle of Zebra”.
They are highly social mammals, creating groups of harems, which will consist of a stallion – who is the official and proclaimed protector of the group. Females have a distinct dominance-hierarchy within this harem and generally, just one mare will have a foal each season. Make no mistake – mares will fight for the position when the opportunity arises. Males will also steal females from already-formed harems.

Their stripes are unique to each individual much like our fingerprints. No two Zebras have identical coats. This even helps with the bond between mare and foal, or in simpler terms – Mother and Baby. From a very young and fragile age, the little foal will know his Mother by imprinting on her specific stripe pattern and of course nurse from her.

The gestation period is approximately 360 days and baby will nurse from mom for about 8-11 months but will start enjoying his salad (grass), like the rest of the others from about a week-old.
Ever wonder why a Zebra foal looks so disproportionate when so young? Those legs they have to grow into? As always Mother Nature has thought of everything. Their legs are already as tall as the adults, obviously just skinnier, due to the fact that predators cannot spot the young and weak ones that easily, when the harem encloses them and hides them from the hungry lions, for instance.
The stallions have a sharp, enlarged canine-like tooth known as a “tusher” and mares have a small, peg-like tooth in its place. And you better believe they use it! Zebras can be very feisty, not only biting each other but of course with that powerful kick as well, they sort each other right out and establish dominance.
So to get to the oh-so-sought-after question…black? Or white? It would seem that they are white with black stripes, seeing that the majority of the body seems white. HOWEVER embryological evidence shows that the actual skin of a zebra is indeed black. On their legs, they have what we call chestnuts, also known as callouses. This unvails the true color of their skin, as many believe this is their birthmarks. Hypothesis – not actual facts though. But even when witnessing lions on a zebra kill, I have often seen that their skin is after all black.
So now you know…
But will we truly ever know and fathom everything in nature?
The answer is no.
And that dear friends are what makes this job of ours so absolutely incredible. We will never really know everything. Even the most experienced and qualified guides learn something new every day. Witness something for the absolute first time. So on our next safari, rather than pondering… let’s admire, appreciate and delve deeper.