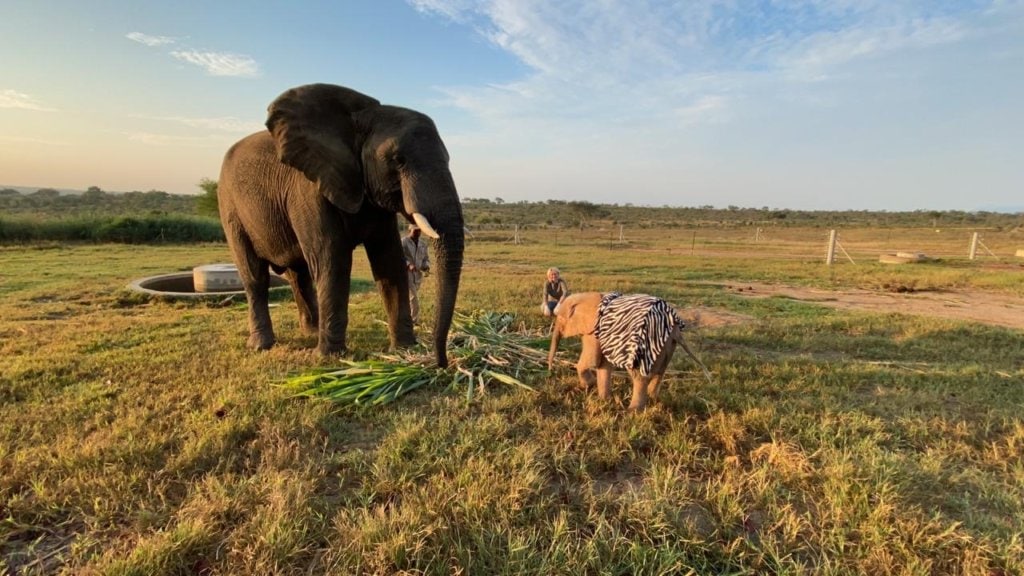 The HERD and Jabulani families have been quite busy over the past few days during the nationwide lockdown in South Africa, and from Jabulani we have some exciting news to share!

Over the last week, Jabulani and Khanyisa, the albino elephant orphan that is currently in the care of HERD, have been meeting with no barriers between them, for real heartwarming trunk-to-trunk meet-and-greet moments! The two began their curiosity with each other across the fence that separates the Jabulani stables and the HERD orphanage, with Jabublani coming to visit Khanyisa, as if checking in, almost daily. These new meetings, side-by-side without the fence, are so inspiring to witness and are leading the path to HERD reintegrating Khanyisa into the Jabulani herd, so that she can have an elephant family of her own.

Here is a look at these two special recused orphans intimate get-togethers, as shared by the HERD team:

This was the first big moment in the slow integration of little Khanyisa into the Jabulani herd. Khanyisa was following Adine around in the morning at HERD, as she likes to do. Adine needed to visit the Jabulani herd, so she stepped out of the nursery to see the elephants in the bush, but Khanyisa wanted to be by her side. Adine returned to the stables and took Jabulani with her and then opened for Khanyisa to come inside. As Adine headed to the stables, Khanyisa followed after her and then the moment came… Jabulani and Khanyisa, no barriers, touching trunks. Jabulani is the original orphan whose brave journey, having been rescued 23 years ago, led to the creation of HERD in 2019. We believe he must understand Khanyisa and her journey more deeply considering his own past.

Have a peek at this first meeting here:

Khanyisa turned to enjoy a bottle of milk with her carer Godknows and once finished, she was off to explore the stables where Jabulani came to visit again. But she showed more interest in her future family’s dung than she did in Jabulani, and he soon decided to return to the herd.

On the third morning, Jabulani and Khanyisa spent a bit longer in each other’s presence and have continued to get to know one another slowly. Jabulani continues to remain calm and relaxed at all times, taking it all in his stride. It is as if he knows she is a particularly special little elephant that needs extra special care!

Here is a snippet from the third day of the adventures of Jabulani and Khanyisa:

Khanyisa and Jabulani came together for the fourth day of bonding, in the coolness of the early morning, together with Adine and her son, Xander and elephant manager, Owen, and carers, Stavros and Forbes ~ starting in the soft light of sunrise!

Little “meisiekind” (girl child, as Adine calls her) is becoming so at home with Jabulani and this video ( featured below) really shows how comfortable she is, getting up close to the big boy, and also how content Jabulani is with her little presence and curious venturing trunk, even as she tries to help Adine’s son, Xander with the spade right underneath him.

This may just be the greatest combination of nerve-wracking and heart-warming series of moments! It certainly was one of the most astounding moments on our journey thus far, as we slowly introduce Khanyisa and Jabulani to each other more and more.

The two elephants meet up for the fifth time, at their favourite bana grass and dung restaurant and then something unexpected happens! Little precious Khanyisa, showing her natural elephant instincts, reaches to big boy Jabulani to suckle on a teat, as she would with her mother. Of course, Jabu not being her mother and instead a very large male bull, isn’t able to assist. But he lets Khanyisa explore his underside. This is where we get a little anxious, since so much can happen in these moments when Khanyisa gets so intimately close to Jabu. But Jabu continues on with his bana grass, munching on even as Khanyisa lets out a snore-like rumble.

Our hearts calm back down as the moment ends and the two of them walk off with Adine, Tigere and Blessmore. This is where it gets even more heartwarming as Khanyisa toddles after her new big father figure, copying his movements out in the bush on their way to the dam. Mimicking his actions and behaviours is another elephant instinct and it’s exactly how a calf learns to survive in the wild.

These moments between Khanyisa and Jabulani are about so much more than getting to know each other. They’re about sharing and learning; they’re parenthood in motion.

We will keep you updated with the continued progress of Khanyisa’s integration into the Jabulani herd and share all the special moments with you.  We are very excited about the future and to gain a new member to the Jabulani herd (although she already is a big, bright part of the Jabulani and HERD family!)

The Jabulani and HERD teams