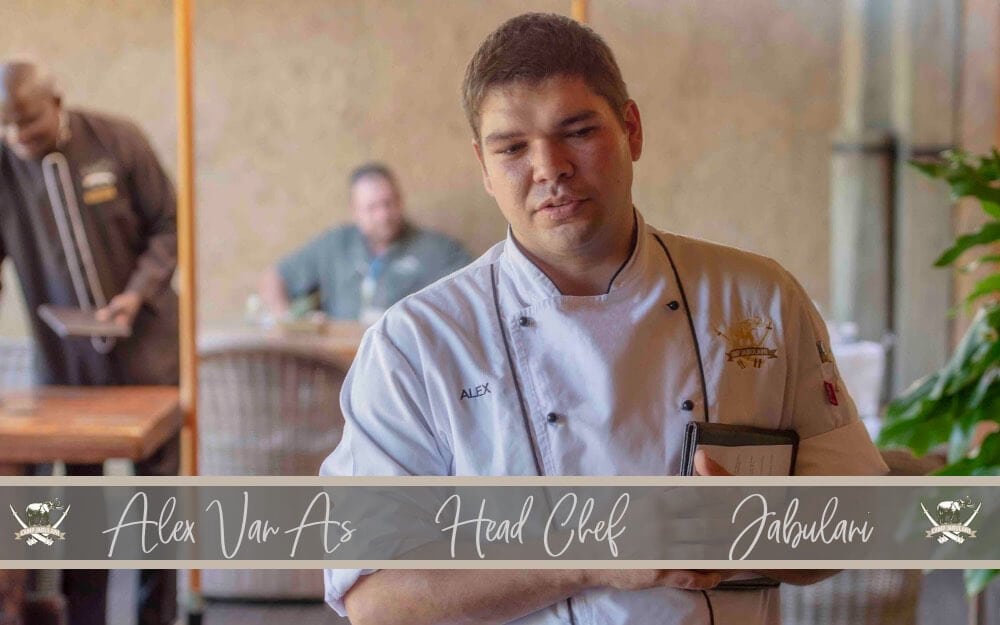 From the Jabulani Kitchen – Chef Alexzander van As

From the Jabulani Kitchen – Chef Alexzander van As

Take a peek behind the scenes of the Jabulani kitchen, and meet Chef Alex Van As, an asset to our Culinary team.

Head chef Alex, has been pleasuring our guest’s tastebuds since October 2014, when he first joined the Jabulani team. Prior to that, Alex had worked in well respected kitchens, mostly based in Johannesburg, where he is from.

Having worked in high paced and stressful environments, often cooking for celebrities and elaborate functions, it was a refreshing change of pace to work in the African bush, in such an intimate lodge, with just six suites and one villa.Alex finally had the gift of time to express his creativity in every meal, and truly focus on every guest personally.

At Jabulani, we allow our chefs the freedom to create a new menu every day, making the best of our freshest seasonal ingredients and our chef’s creative flair.  All of whom love the trust and freedom that they have to do so. And it shows. Although he enjoys working with all ingredients, Alex’s greatest passion lies in cooking with meats. He feels that is where his strength lies.

When it comes to herbs, nothing beats fresh thyme, Alex’s favourite herb to cook with. He finds it very versatile and can be used in a wide range of meats and fish, as well as with bread and making beautiful bread dipping oils.

The Jabulani chefs grow their own herbs, so it is always readily available to pick at its absolute freshest. When his chef’s jacket is hung up, Alex loves spending time with friends and family, and enjoying a good braai (barbeque) and all things rugby. He is an avid Lions supporter (a local South African provincial team from Johannesburg/Gauteng area), as well as supporting our national rugby team, the Springboks. His favourite part about working at Jabulani?

“The people. Without the people it would not be the same. They are my second family” says Alex.

Executive chef, Dylan Frost, and Senior Chef de Partie, Zandrie Boucher, are Alex’s colleagues in the Jabulani Kitchen, and together they are a formidable team