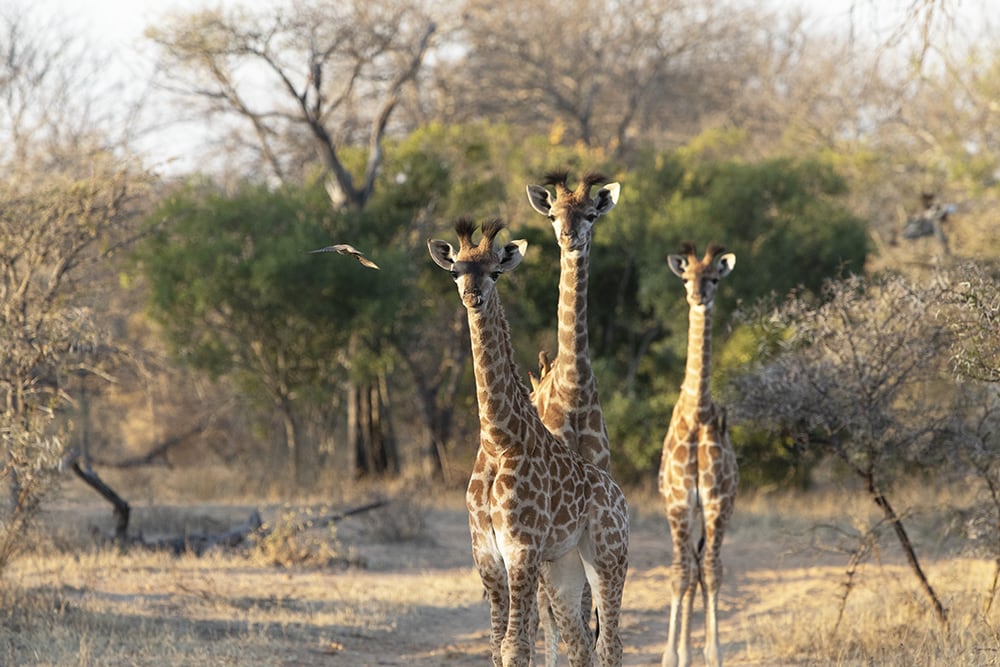 We had been trying to find a corner of the bush to take in the sunset, put our feet on the earth and connect with the land the animals walk each day. But the animals were everywhere. We couldn’t stop and get out at the usual sundowner dam, because the hippos had taken it over and their pods were not going to give it up without a fight. And now, as we kept driving, somewhat speedily to catch the last of the sun before nightfall, we had come upon a giraffe congress in the middle of our path.

We were parked in the game vehicle a distance from them, but every which way we looked giraffes were there. The offspring among them were not sure where to go and what to do first. First they huddled together, then they flew to opposite sides of their territory, then they wanted Mom, then they wanted to play with their other shorter brethren. It was a flash of light brown spots, diamonds, rectangles, hearts and all the other unknown shapes that make up the unique coat pattern of each giraffe.

As generally graceful creatures, adult giraffes can kick and knock necks with grave fury, and hold that same natural dichotomy of character as any other animal, including humans. But with baby giraffes, from the newborns to the taller toddlers still holding onto their umbilical cords, there is only the goofy: oversized ears, excessively large eyes, uncontrollable lapping tongues, permanent smiles under button noses, and those two tufts of furry horns like two birthday party hats atop their relatively tiny heads. 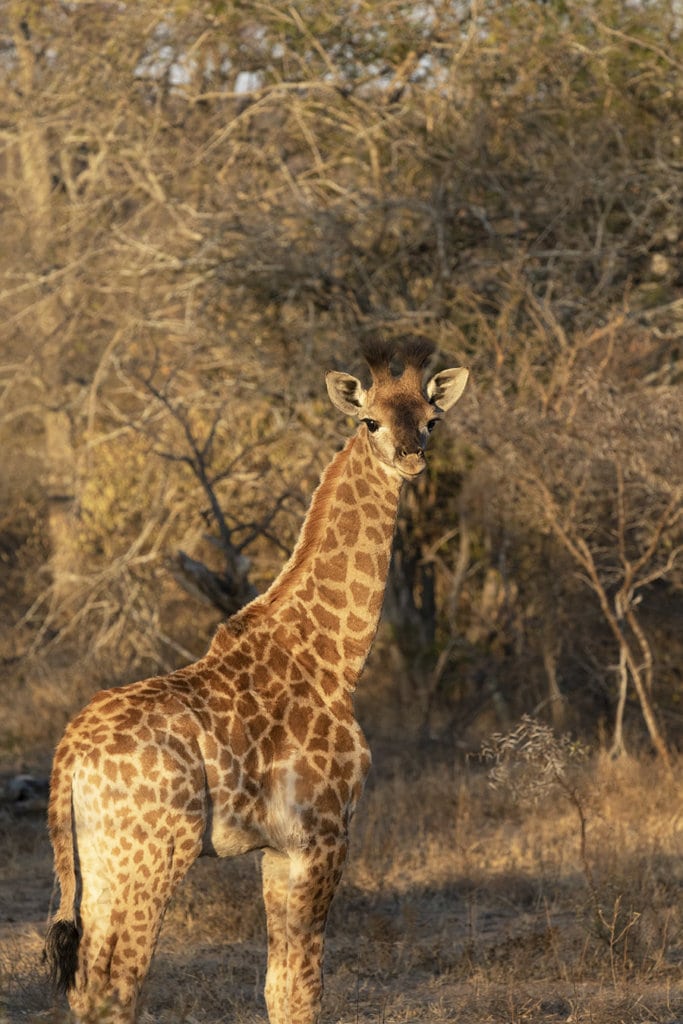 The mothers of this party were not particularly genteel to their young on this afternoon, but perhaps they had something serious on their minds, like food and safety. One calf ran after Mum for a suckle of milk, doing whatever it could to get her to stop and let it feed. The calf would go in for a suckle and Mom would swiftly turn and trot. Baby would catch up and throw her head against Mom’s rear, with a rub, but Mom would throw her head to the side and carry out a U-turn. It was not time for dinner yet, clearly.

Giraffe mothers often take turns watching over the calves in their journey, but if necessary, the mother may leave the calf by itself, to go off to feed. At times like these, the calf will lie down and wait for its mother to return. Young giraffes are already 6 feet tall (1.8 m), weighing in at around 45 to 68 kilograms, and they crack the trick of walking very soon after birth. They still need their babysitters though, and this calf before us clearly wanted hers close to her side. 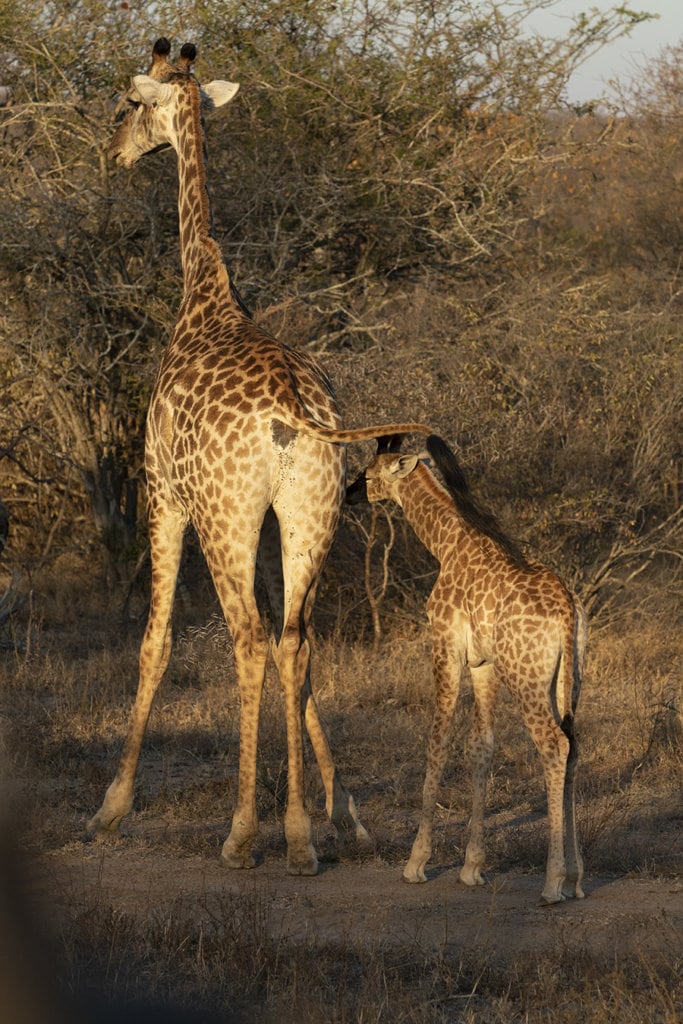 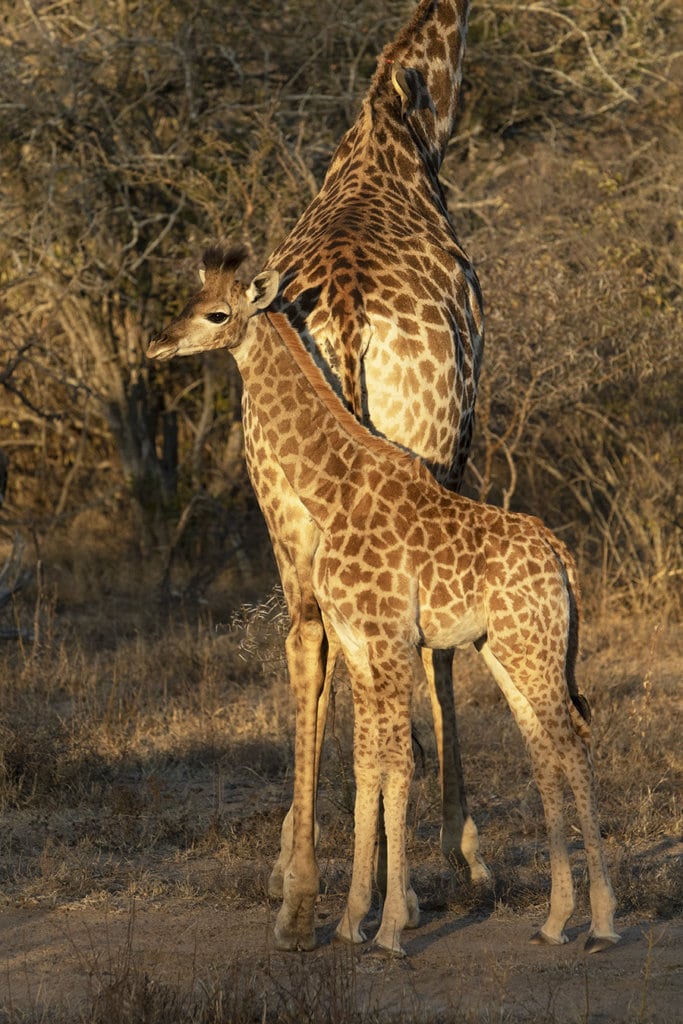 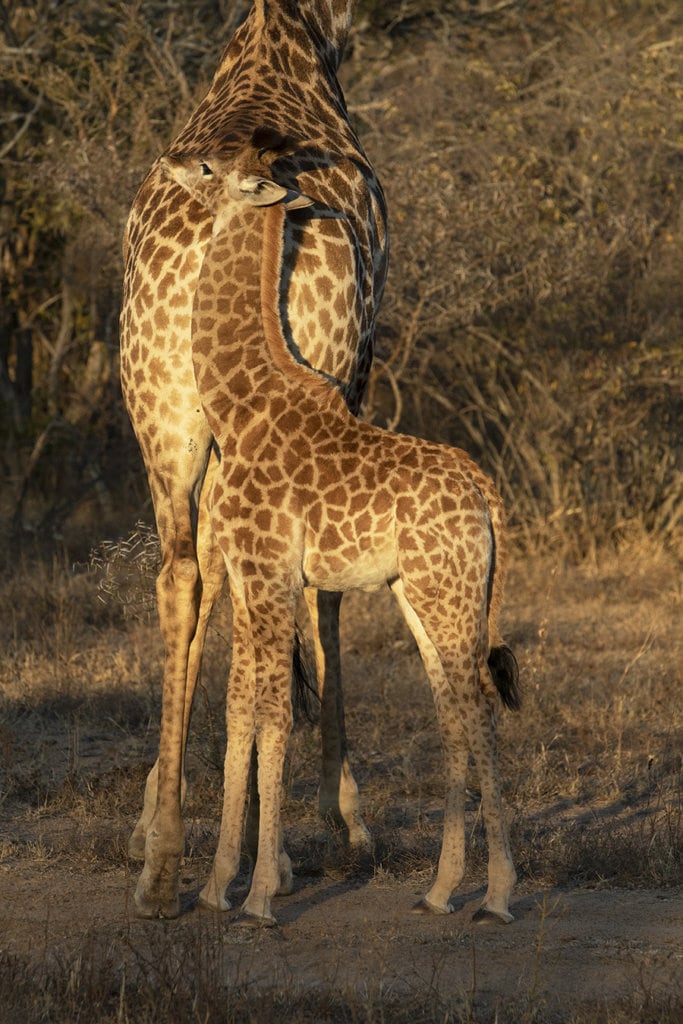 Even with all the activity around us at this congress of giraffes, the bush was relatively silent… These tall towers in the late afternoon light never made a peep. Giraffes have their own sounds for communication that are simply too low for us humans to hear. When the giraffes need a heads-up, they have their resident oxpecker birds (Buphagus africanus) preening their coats for ticks to help alert them to danger by loud chirps.

It was clear we would miss our African sunset if we didn’t move soon. But it’s hard to choose between chasing after the sun, that great time-teller and life-giver, before it drops, or watching such a vibrant community of giraffes. These animals may be a common sight in wildlife reserves but they shouldn’t be taken for granted.

Seven of the nine IUCN-recognised giraffe subspecies were recently assessed to reveal their conservation status. Three of the giraffe subspecies are listed as Critically Endangered: West African, Kordofan and Nubian giraffe, and Endangered: reticulated giraffe, with more listed as Vulnerable (Thornicroft’s) and Near Threatened (Rothschild’s giraffe). The giraffes here in our home country of South Africa and East Africa’s Maasai giraffe have yet to be assessed. Our local giraffe population seems to be strong, while the Maasai giraffe population has massively decreased and is thought to soon be listed as one of IUCN Red List’s threatened categories. 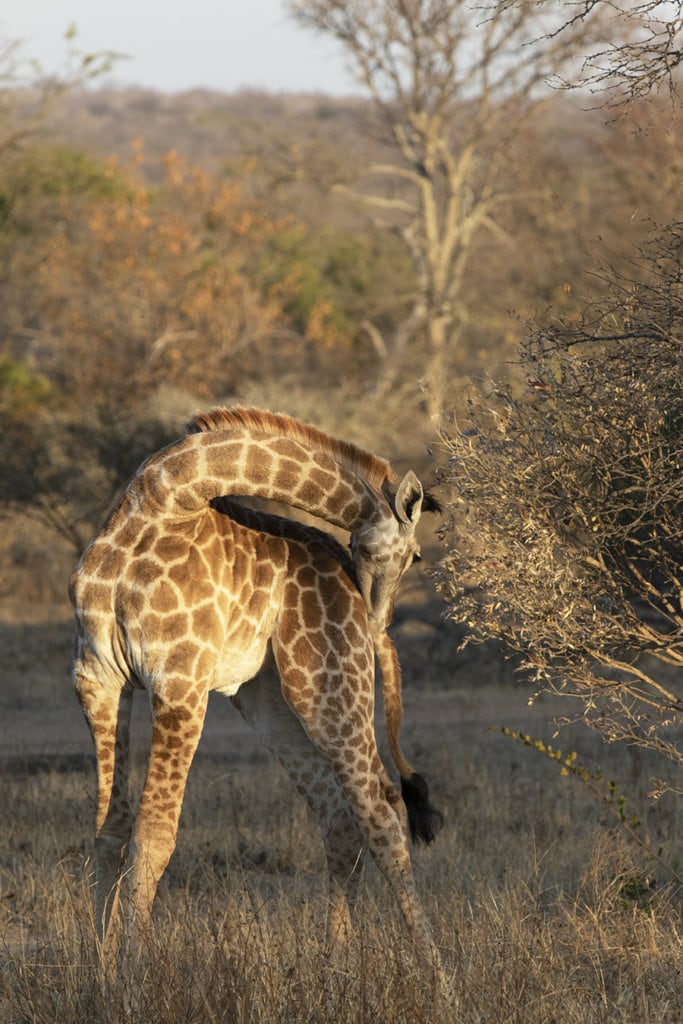 There are fewer than 68,000 giraffes left in the wild, compared to an estimated 150,000 roaming our savannas three decades ago. They face the same challenges many of their fellow wildlife species face: poaching and habitat loss. It’s the same fate that faces rhino, pangolin, lion and elephant, yet often unnoticed and overlooked.

We decided to catch the sunset on another day, for that was always assured to us. This evening, we’d stay with this big boisterous family and their goofy calves for a while longer.