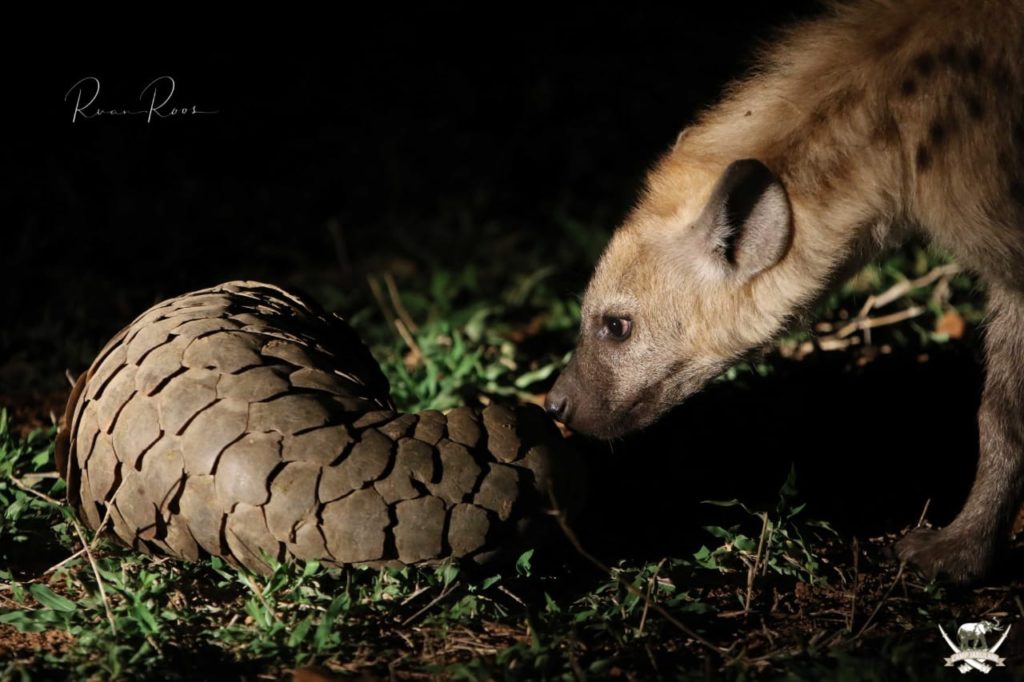 There are certain wildlife encounters that as rangers, we know we will tell the story about fondly, for many years to come. Last night our Jabulani guests and I were fortunate to experience such a sighting. It was after dinner that we decided to head out on a late night game drive. We came across a clan of about nine hyenas that were busy playing with what I assumed to be a rock, as it was quite a dark night.  It was amusing to watch the young hyena’s play around, until the supposed rock opened to reveal itself to be a pangolin.  Due to it’s hard outer armor made of plated scales, the hyena’s failed to get to the softer parts of the pangolin. This is incredible, and testament to the strength of the scales, which are made of keratin, as hyenas have the strongest bite force of Africa’s land mammals.  Seconds after these photo’s were taken, a youngster got tail-whipped on the nose which resulted in a decent size cut. This youngster definitely learned to be more careful, and that pangolins are best left alone.

Temnick’s Ground Pangolins are listed as vulnerable with numbers drastically decreasing due to illegal poaching for their scales as well as for it’s meat in rural areas, and sadly, have become a less familiar wildlife sighting in Africa compared to previous years. There are eight different species of Pangolin’s. Two of which are critically endangered, two are endangered, and the remaining four (including Temnick’s Ground Pangolin), are listed as vulnerable.
Images and blog by Jabulani Ranger, Ruan Roos.